We are examples below Introduce yourself in German we will give you the sentences, the self-introductions we give you are mold and you can change the words we color in the sentence according to you.

Now, the tablarda we will give below will include questions about self-introduction statements as well as where to find the person we are and how old we are.
Since such introductions and recognition cues often take the form of mutual dialogue, there are also a number of other German sentences and phrases that can be used in a dialogue and which may be of interest to the employer.

You can change and customize the words in the above table that are colored in red.
Now let's learn some other phrases that will help our business in situations like meeting and greeting again.

German Self Introduction and Meetings

Now that we have learned to give information about ourselves, let's learn how to ask various questions.

We can ask one of us with two types of sentence.

Now look at other shots about asking names to other people:

Wie heißen sie? : What is their name?

If we were to ask someone else about us then:

Who is this? so we ask who this is.

Wer ist das so who is this question Das ist Mustafa .


Look carefully at the image we have prepared for you below. 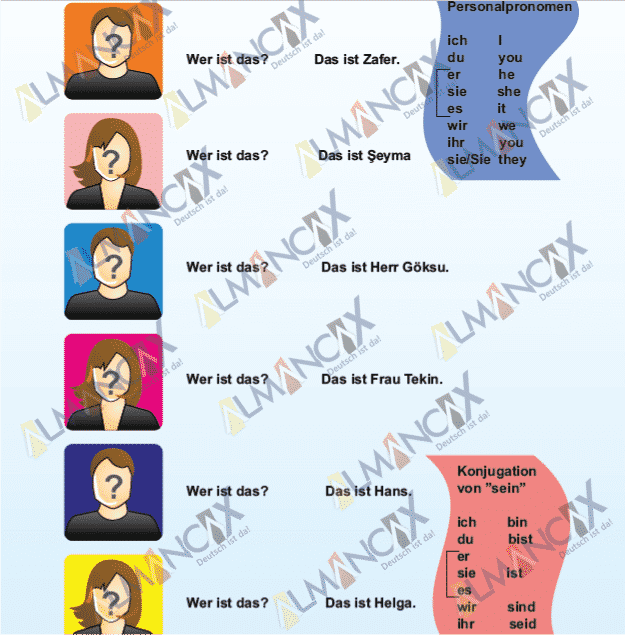 Many examples of German self-introduction can be given, as you learn German personal pronouns on our site, the sentence in the present tense and the conjugation of the most commonly used verbs, you can also build different sentences on your own.

We have written a sample sentence below and translate the sentence yourself.

Introduce yourself in German We will be happy to write your questions, opinions and suggestions in the comment field below. We would like to wish you success in your German lessons.

We wish you all the best in your German lessons. German self-promotion, dating, greeting and say goodbye to sentences such as sentences can search our site.