The topic of German colors is usually based on memorization, and in the first place, it will be sufficient to memorize the most used German colors in daily life.

German colors Since the subject is used quite frequently in daily life, it is one of the subjects that should be thoroughly memorized and learned. When we talk about beings, we usually mention their colors. E.g "That red Would you look at the tree next to the car? How beautiful!","Mavi Can you bring the toy next to the ball?We can give examples of sentences like ”.

We have seen in previous lessons how to use adjectives in German cues in German, in front of German names.

Now you can see the German colors and the Turkic paintings in a table:

When learning the topic of colors in German, you must first learn the important colors, namely the main colors. You can learn the less used intermediate colors later according to your wishes. For example, we can give examples of colors such as red, yellow, blue, white, black, orange, dark blue, brown as examples of the most used German colors. 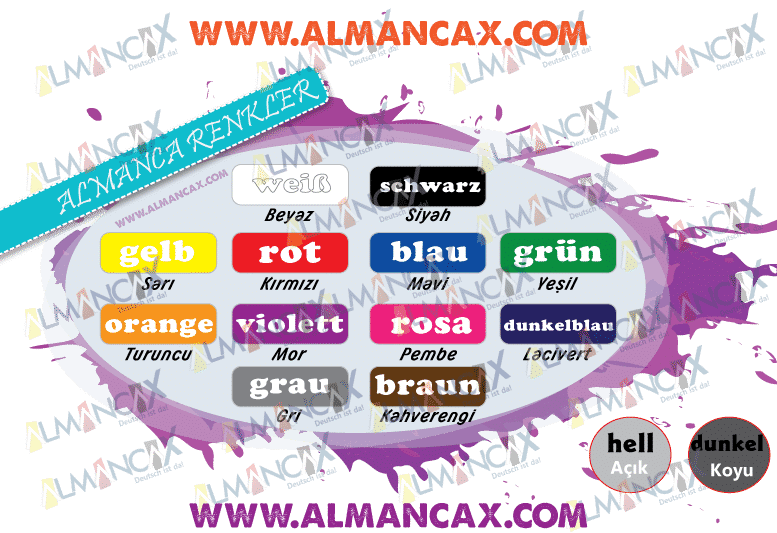 German hell word means open, dark The word means dark.
If we specify that a color is light, for example when we say light blue, hell to indicate that it is dark dark We use words.

Now let us see the examples we have prepared for you and sample sentences about German colors:

In the above image, Das ist ein Apfel is the definition code.
Der Apfel ist gürün cümlesi under the Resminence is an adjective statement that informs the color of the object.
Notice the distinction between the difference and the definition vocabulary and the adjective vocabulary.

To give the above sentences in writing:

We can write in the form.

In German, the colors or other qualities of objects are said using the following pattern, as seen in the above images:

In the above pattern, we use the auxiliary verb ist / sind, which we have seen before, as ist in singular sentences and as sind in plural sentences. We gave information on this subject in our previous lessons.

Now we can finish our German color class by writing a few sample sentences using the above pattern.

German colors and colors are used in the sentence as above.
You can also write different colors and objects and a wide variety of clues by yourself using the above pattern.

We will be happy if you write any of your opinions, suggestions, requests and questions about German colors in our forums.

The German lessons on our website are prepared with friends who are just starting to learn German in mind, and our German lessons are explained in a very detailed and understandable way.

In this way, you can learn German colors better and you will not easily forget.

With our best wishes ...
I www.almancax.co