Hello, dear friends, German artikeller subject narration titled in this lesson, especially the German language learning friends who are curious, sometimes difficult to understand and many people have difficulty understanding German Artikeller We will talk about.

In our first lessons, we stated that the initials of generic names in German should be written in capital letters and that each genus name has an article.

In our lesson called articles in German, we will first talk about what an article is, how many types of articles are in German, and which words are in front of these articles. Finally, we will reinforce what we have explained with examples and we will conclude with the subject test of German articles.

The topic of German articles is a very important topic. It must be learned very well. German articles It is not possible for you to speak and write German correctly without learning how many articles are available. Especially in subjects such as nouns and adjective phrases article on It will make your job easier to have very good information about.

After reading the lecture in German articles, we recommend that you take the German articles subject test with a few questions at the end of the lesson. Now let's give our topics and start our lesson.

The article is often referred to as one of the most challenging topics in German language learners.
We will be entering this topic in this section and we hope that you will see that this is not a very complicated issue.
Let's note that if you memorize the words together with their articles, you won't have much of a problem with this. But still, we will make broad groupings on this subject and examine which types of words are used with which article.
Now let's go to your position ..

In German there are genders of sex names and these genders are of three kinds.
In German, nouns are either of the masculine gender, of the female or of the neutral gender. Therefore, the article in front of the name changes according to the gender of the name.

In German, certain articles are called, das and die articles.

Indefinite articles in German are ein and eine articles.

Certain articles and indefinite articles in German We stated that there are two types of articles, namely.

So now he says, known as das and die articles Specific articles in German Let's give information about:

In German, all genus names are called artikel der, das, die One of the words is found. These words have no Turkish equivalents and cannot be fully translated into our language. These words are like a part of the name they are in. When learning a name, it is absolutely necessary to learn its article together as if it were a single word with the name. This der das die words are classified as specific articles.

If you just memorize the word without learning the article, the word you learned will not do much. Nouns in German, singular and plural, adjective phrases and so on. The importance of articles will be better understood. Article in some sources imesdefinely”Some of them“definitionIt passes as ”. In addition, articles are abbreviated as shown below in many dictionaries and resources. Please keep in mind the abbreviation letters shown.

In German, the article of gender names whose gender is male is "der".

The article of genderless gender nouns in German is "das".

However, when we say the gender of the noun, let's pay attention to the following: It is difficult to know the gender of nouns in German, you cannot predict the gender of a name from the meaning of that name. This is all about grammar and word structure. Therefore, when learning a new word, what is the gender of that word and article You can learn what it is only from dictionaries. Although there are some methods of predicting what a word's gender and article might be in German, it is still the most accurate. To German dictionary to look and learn. 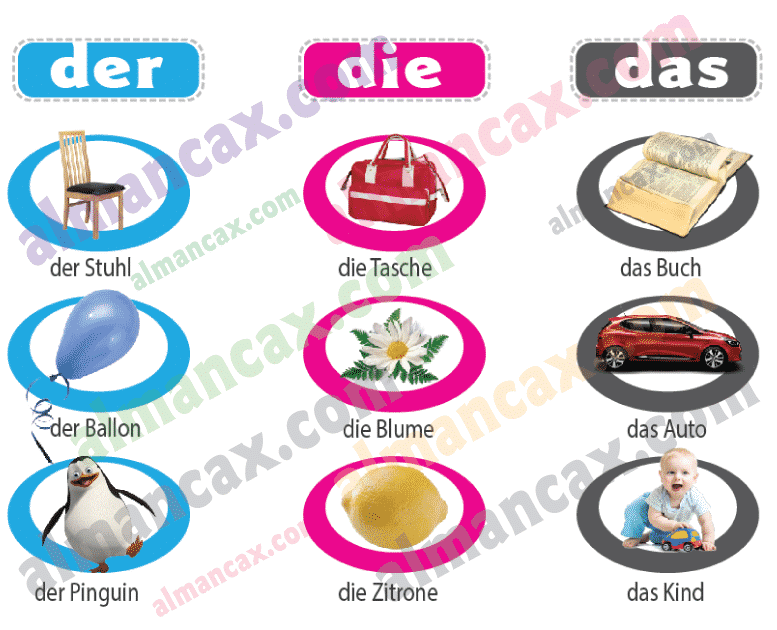 In German, there is no relationship between the gender and the meaning of the words, that is, there is no such thing as the gender of the names that evoke masculine, as in the English, that the words that associate masculine and feminine genres are feminine.

Representation of German Articles in Dictionaries

German artikeller In dictionaries, as we have written above now, "der Tisch, die Katze" and so on. they are not included in the form. Words are not written with their articles in German dictionaries. Just put a little sign next to the word and article is specified what it is. Articles are abbreviated in most sources as follows:

A clay articulated of the In German dictionaries, a small r the letter is placed

A clay articulated the In German dictionaries, a small e the letter is placed

A clay articulated the In German dictionaries, a small s the letter is placed

These letters toor  die  das are the last letters of their article.

A clay articulated of the there is a small r put the letter, the next to the bald e put the letter, the ise s The letter is put. These letters toor-dueins are the last letters of their article. For example, if you see a letter r next to the word when you look at a dictionary, it means that the article of the word you are looking at is der, in the same way, if there is an e next to the word, it means that the word is die with the article, and if the letter is s, it is das with the article. Some dictionaries MFN letters, mfn letters I maskulin, I Femininum, Neutrum (Male gender-Female gender-Neutral gender) are the initials of the words. M letter to artikelini, The letter F is die artikelini, N is the das artikelini Represent.

Typically, sources and dictionaries can be used to select either source or “m - f - n”Or“r - s - e”.

Dear friends, as we mentioned, while learning a German word or learning a new German word, we should definitely learn that word with its article.

Learning a word what is this article We have to wonder and look. We must group each word we will learn new according to its article and write it to our brain that way.

Dear friends, in front of the words we will use in the sentence certain articles s known, what we mean is easily understood, mentioned before objects are explained. E.g, "i ate the appleIt is understood that the apple mentioned in the sentence is a previously known apple. So “i ate the appleWith "sentence"i ate that apple”Sentence gives the same meaning. In this sentence, what is meant in this sentence is "elmaIt means that a known apple is understood to be an apple mentioned earlier, in the middle.

Certain articles in German der - das - die We gave information about the articles.

Now let's give some information about the indefinite articles in German.

The words Ein and eine mean "one" or "any one." They can be translated this way.

All words that are male and genderless have the article ein in front of them.

All words of the female sex have the article eine in front of them.

Or we can say this in another way. As we have just mentioned above, the specific article of male sex words was the "der" article. The definite article for genderless words was "das". The article of female gender words was "die" article.

If the words with definite die have indefinite article, eine is the article.

Let's look at the second sentence. Got that car says. That car as you said already mentioned a car. It appears to be a car that has been driven, seen or talked about. If the car in this second sentence is a known car, then in a sentence like this definite article namely der - das - die One of the articles will be used. In this sentence because the German word for car is das Auto das Auto The word will be used.

This is the difference between certain articles and indefinite articles.

German artikeller We tried to explain it at length because it is a very important subject.

Now we have a few minutes to dissolve our German articulator topic test.

Dear friends our portal, which is Turkey's largest and most popular German language site contained German article written about dozens of courses available. By searching the search section of our site or German artikeller you can reach all the courses that we have made about German artikeller by clicking on the topic title.

You can write any questions and comments about our German lessons on almancax forums or in the comments section below. All your questions can be discussed by almancax members.

If you do not know in which order you will follow the German lessons, German subject expressionsYou can examine our. According to this order, you can follow our German lessons step by step.